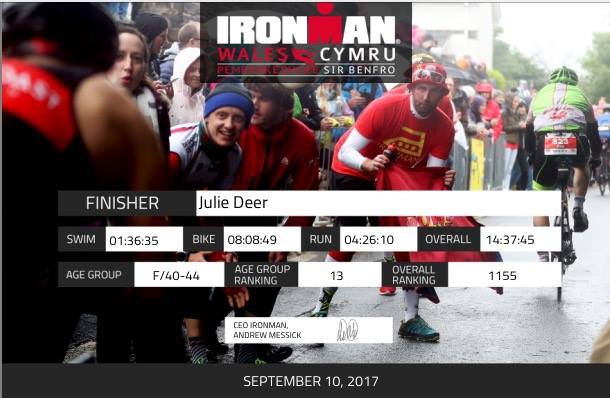 I met JPD (aka Julie Parker-Deer) a few years back on our annual “Iron Ladders Run” that we do in the Vale of Glamorgan in preparation for Darth Mannion.

To cut a long story short, she didn’t really want to write about this as she is very “humble” and was wondering whether anyone would actually be interested.

I’ll let you decide, but personally I think she’s an inspiration. 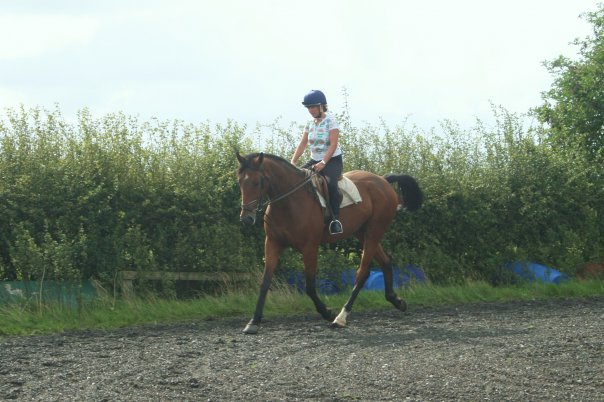 I was never a sporty child until I discovered horses, I loved the sport and show-jumped as a junior on a national level for a few years and this is when I discovered my competitive nature.

Uni, family and life interrupted my time competing (in a good way) and I’ve never really gone back.

After having Fras my eldest, I suffered with mild Post Natal depression and needed something, something for me, something to strive for. 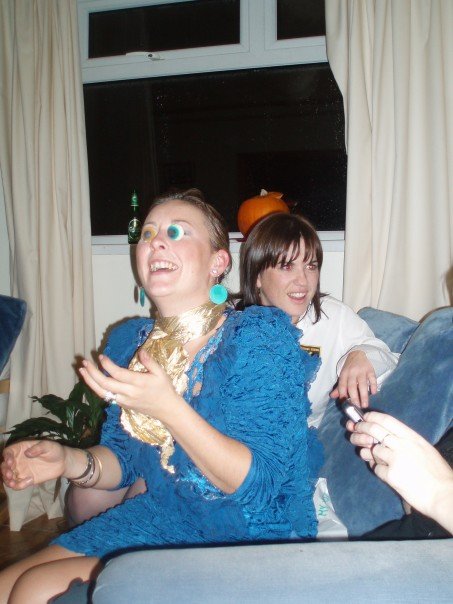 I watched the London Marathon and thought next year that’s going to be me.

I was a size 16, a smoker and relatively unfit.

One year later after dedicating my spare time to training, I did it, 4 hours 58 and 21 seconds. My only goal – not to walk! I did it! The feeling was overwhelming.

Over the next few years, I tried loads of different ways to stay fit, anything that I fancied, yoga, boxing, circuits, running, trx, kettle bells, I did it all.

It made me feel great but what really felt liberating and made me feel alive and happy was running outdoors, coastal trail running, the things you see, the experiences you have, I just love it! 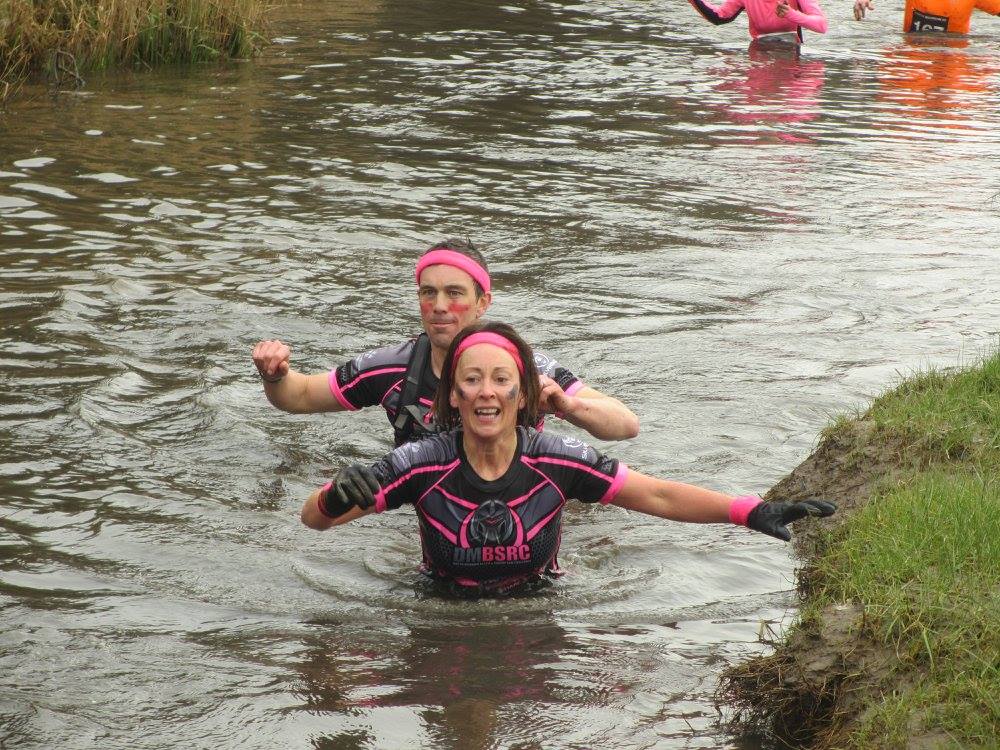 I love doing things as part of a team but I also love a solo challenge.

I discovered a love of being out of my comfort zone and realised that I ‘can’ do more than I ever thought I could or would. Many races later with an increased level of fitness, I heard about Ironman, it was so far off my radar of being achievable but it was there on my mind, the lure of the M dot tattoo was calling.

It’s so easy to say, I can’t. A few tris and a few placings later, Ironman seemed a little more achievable. I volunteered to Marshall in 2016 and supported a few good friends and decided that was it, it’s an event like no other, the support is off the scale and Wales is notorious for being the hardest one out there, so why wouldn’t I?

I knew that being a Mum and a wife, having a job etc would all present me with issues that could stop my training or complicate matters but if YOU want something and I did, YOU have to make it happen.

For the next 12 months I grilled my cycling, tri and swimming mates, I listened to them all.

I joined a group of local cyclists who will be firm friends for ever and I went to cycle Specific, I embraced the challenge and gave it my all.

I joined a swim class and regularly got up at 5 to train, I was exhausted most of the time but when I felt low, I reminded myself that I was so lucky to have the health/ability to even do the training and I just kept picturing the feeling that I would have when I achieved my goal 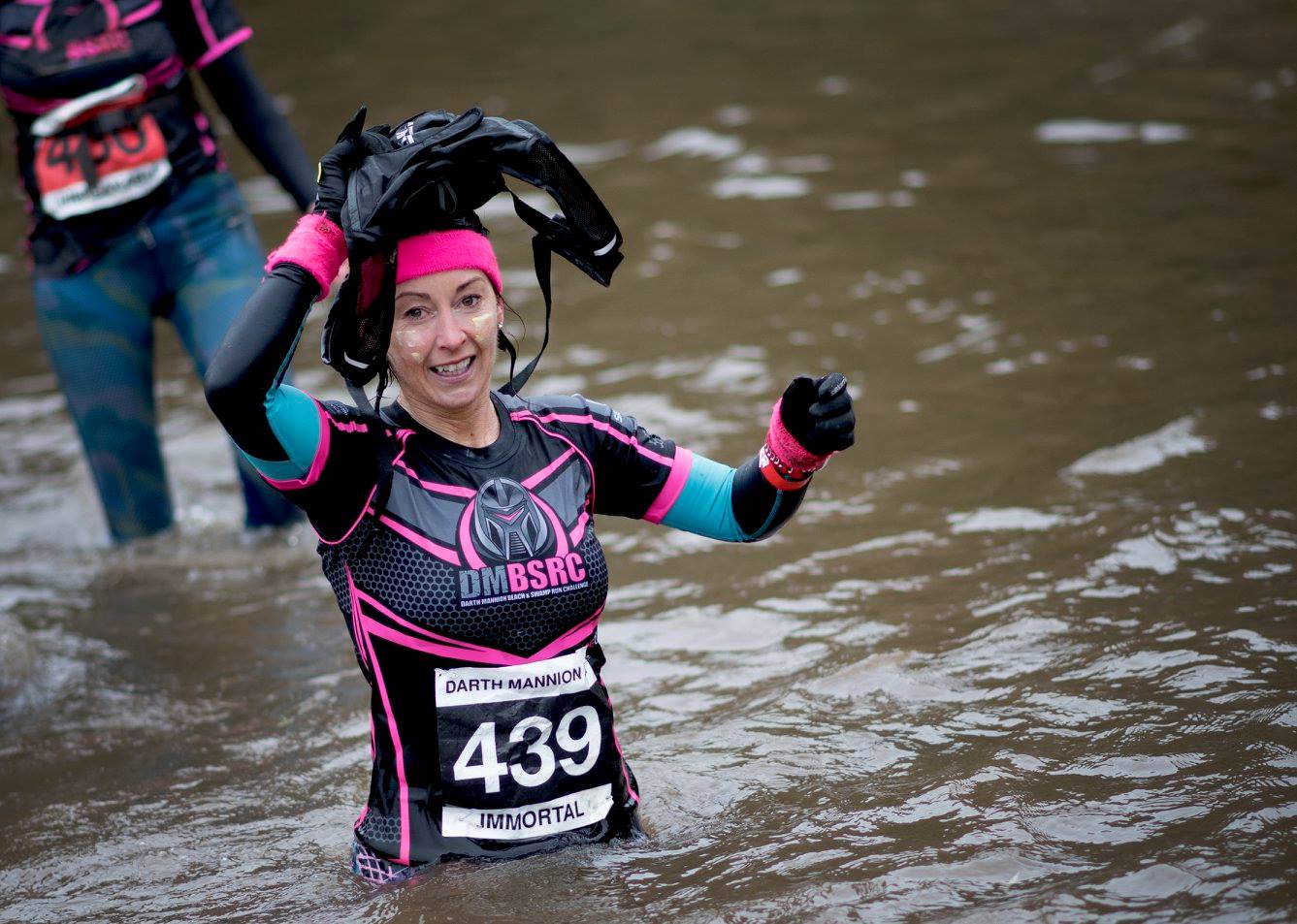 After some amazing advice from two multi Ironmen, I decided to not have a goal other than to complete and to enjoy it. Tenby is far too good a day out to spend it in pain because you didn’t give it your all or because you are racing (I’ll save that for the next one ?).

There were dark days, days when I could quit because I was scared or I felt I wasn’t skilled enough, tough enough but each time I gave those thoughts no value and moved on to the next session.

People make these experiences so much better and by putting myself out there as wanting/needing help, people helped, it’s amazing how much support is around if you’re just willing to ask.

After 12 months of hammering my body but also having lots of training fun, I realised that I’d seen a lot of beautiful places whilst riding multiple 100 milers and met a lot of cool people, new friends and before I knew it, I was tapering for the big day. I travelled to Tenby with my new training mate Emma – my wingman and we stayed down to soak up the atmosphere, which was just insane, West Wales becomes all about Ironman, if you’ve not witnessed it, it’s quite hard to imagine. 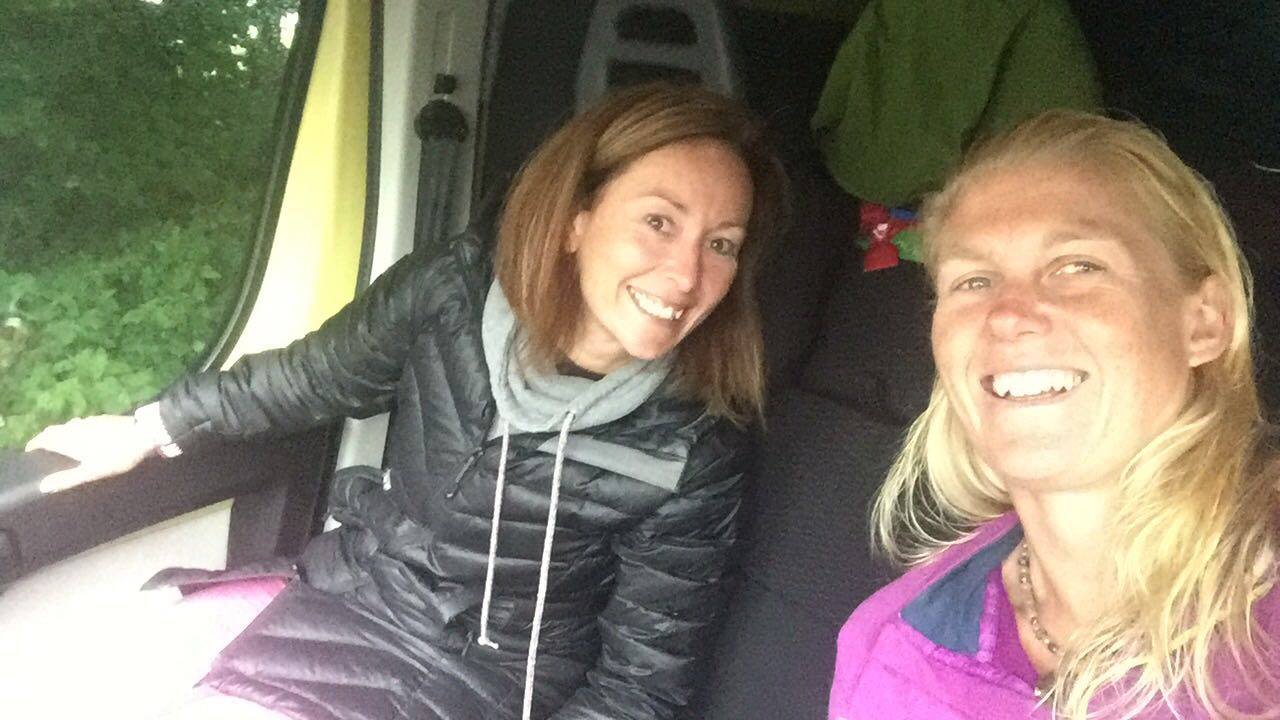 Before I knew it the day was dawning, I’m a fair weather cyclist so my absolute worst nightmare would be wind or rain, we had both, in huge amounts, 40 mph gusting winds and sideways rain. I made a decision to just not let the negativity in, what was the point! If I allowed any negativity in, it would just grow and linger and ruin the experience, so I sucked it up and got on with it. 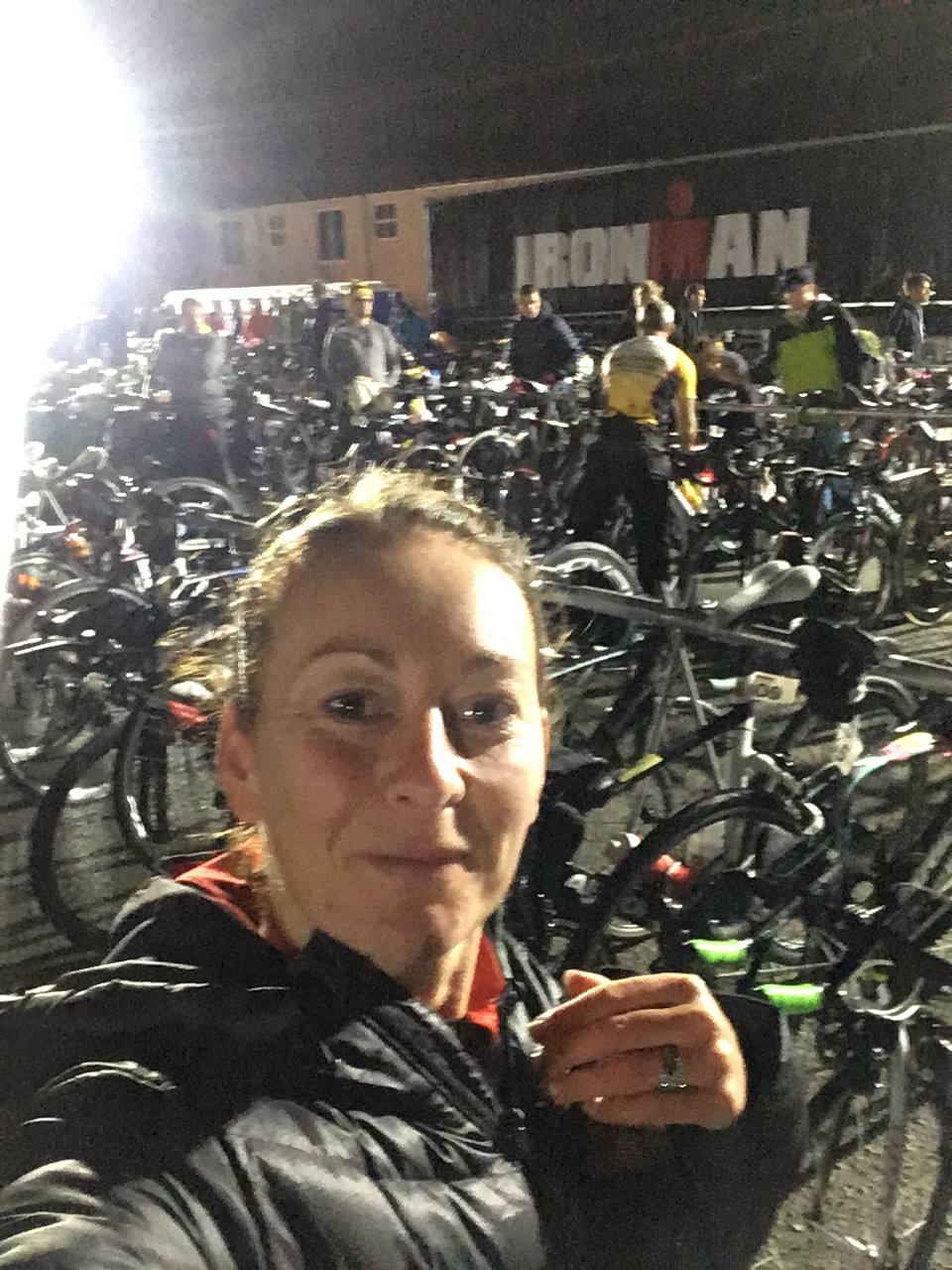 As I walked down to North Beach with Em, we realised we were about to do something special, the atmosphere was electric. Em went to the front of the swim (she is a master of the ocean) and I backed off but my good friend Jayne and hubby Paul of multiple Ironman success let me join them and we waited together chatting to keep the nerves at bay.

The Welsh National anthem boomed and before I knew it Thunderstruck (Ironman Anthem) by AC/DC was playing and we were running into the sea. Because I had no time in my mind, no pressure on performance and I’d done all I could, I was calm, genuinely calm.

After 2 choppy miles, the conditions deteriorated and it suddenly dawned on me, shit, I’m actually doing it!! I got very nervous and just took 2 mins to gather myself together again and finish the swim. 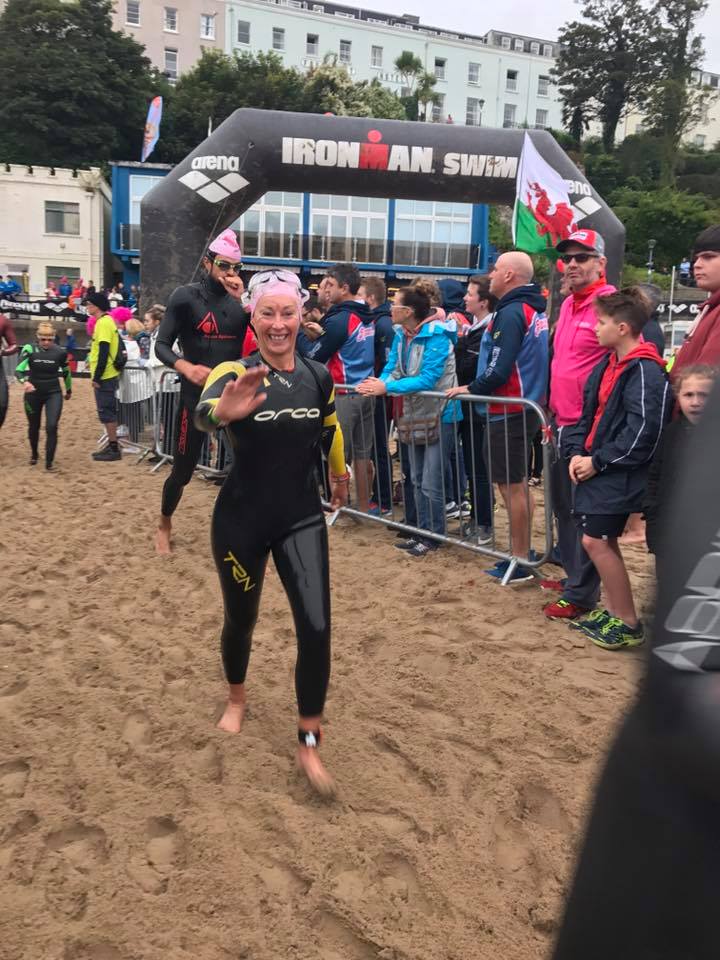 Once again, I wouldn’t allow the negativity in and I just got on with it.

I got out of the water and ran as hard as I could up the hill and through Tenby to transition, swim done

The wind was picking up, gutted but who cares, I’m doing this, be positive and get it done. I drew on the positivity from the crowd and milked it all, I joked with every supporter, gave everyone who held out their hand a high five and I thanked every single Marshall, if you allow yourself to enjoy the experience, it’s so much better. I could have focused on the wind and the rain but I didn’t, I focused on the amazing supporters, athletes, families, kids and organisers and that made me feel good. 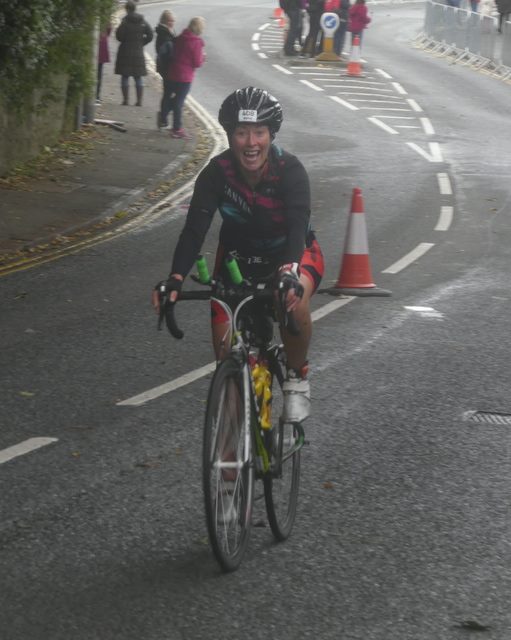 I ate constantly on the bike, things I liked, not necessarily the right things but those little rewards break up the 112 mile monotony, cutting the course down into sections makes each bit achievable.

Out of 2000 athletes 300 quit or DNFd on the bike course, I wasn’t going to give up today for anyone.

I racked my bike in Tenby and kissed it, this is when the day got even better, if you get to this point, it’s pretty hard to fail, I couldn’t wait to run, to meet the drunken Tenby support crew, there is no point that you don’t have nutters making you feel like a legend, it’s like the Welsh Tour de France on steroids! 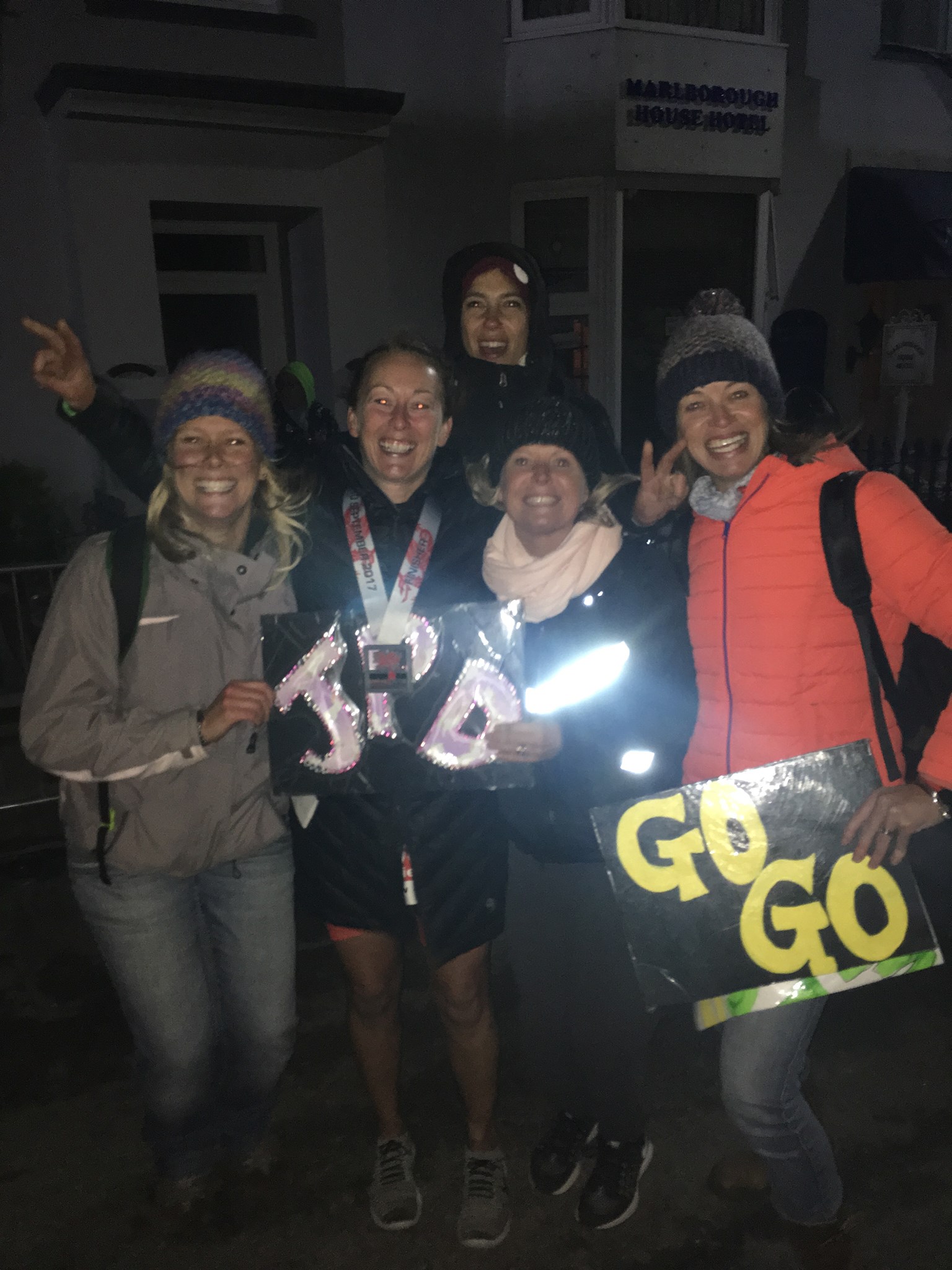 I ran a great Marathon but that’s because I was happy, I fed off the crowd and it shows in your performance, I chased down Ryan Jones, joked with every athlete and once again thanked every Marshall and high fived every kid. 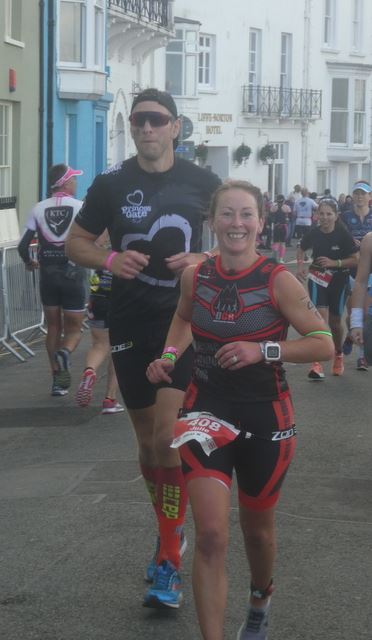 It’s even more special when you see your own. 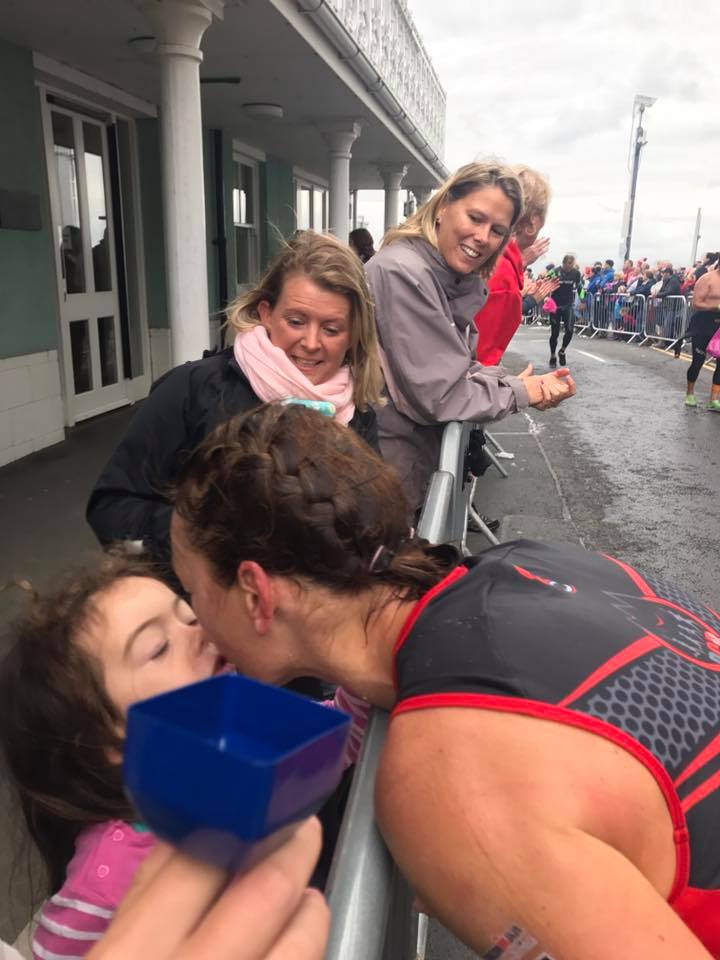 I had friends everywhere on the course and the support from them was insane, I had no idea some of them would even be there.

On my last lap, I slowed it down and took it all in because it was about to end, I’d almost done it and it felt amazing.

The red carpet was there, hundreds and hundreds of people willing you on, the the lights, the big screen the Mdot lit up, this is it. I ran down, to that famous Irish accent calling…

“Julie Deer, you are an Ironman”!

It was insane, I don’t think I’ve ever jumped up and down so much in my life.

My friends had made it too, my family, my friends they were all there and I couldn’t have done it without them, yes I did the hard work but they supported me, you just can’t do it without that.

The medal came, the t-shirt came but I just felt proud and so pleased, to only have the goal to complete something and to enjoy the journey makes the experience so much sweeter, no pressure, no times, no feeling of failure, no pushing so hard it hurts, yes I’m competitive but this journey wasn’t about that, it was about me v Ironman and I’d done it!

My time could have been quicker, in reality an hour and 15 quicker but I didn’t and don’t care, I loved every second and wouldn’t change a thing.

I am an Ironman and a very happy one, all that’s left to do is decide where to put the tattoo. 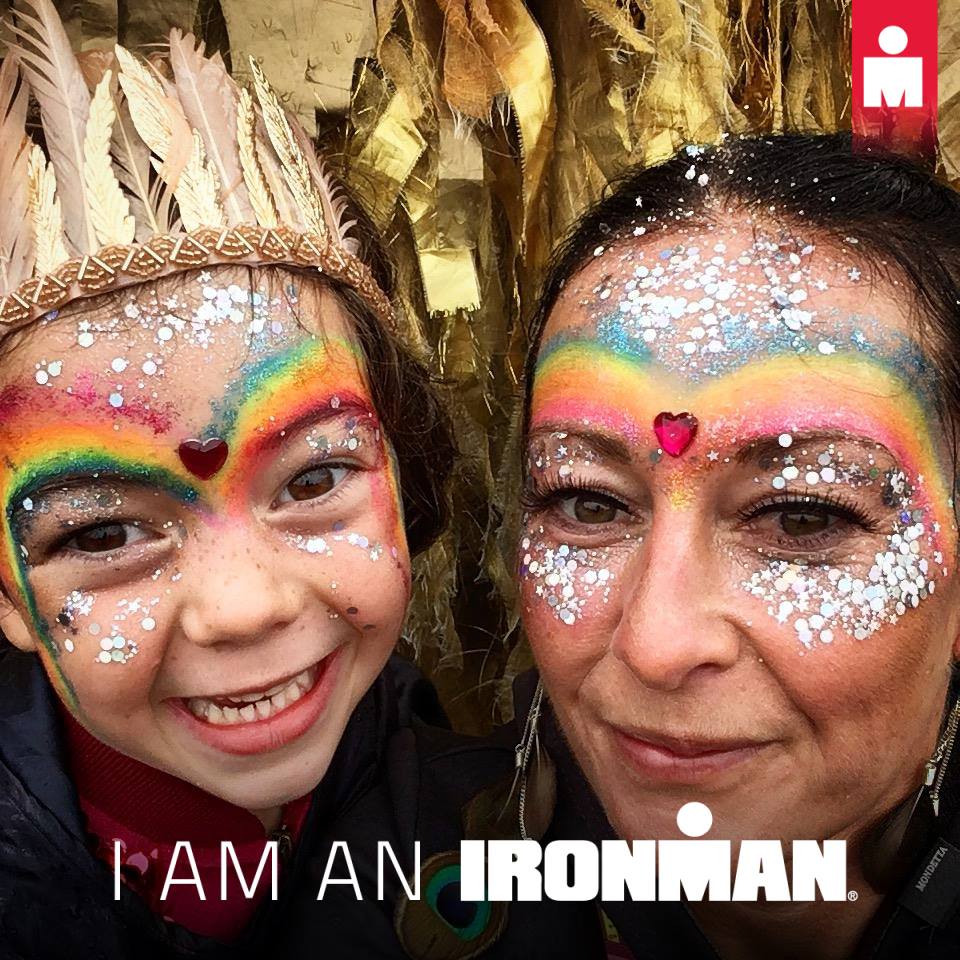