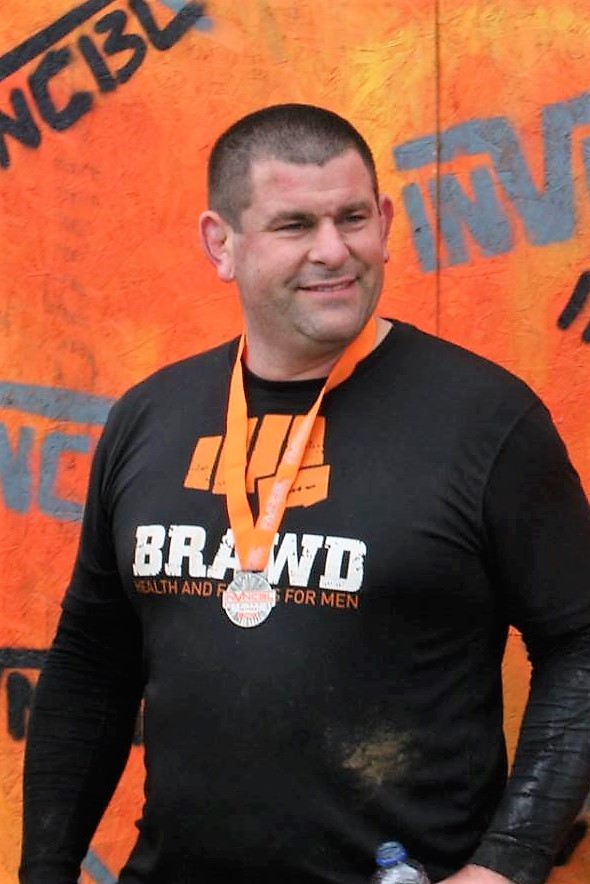 1. What do you do for a living? If you could create a job to do, what would it be?

I am an electronics technician by trade I am currently working for a company that makes industrial water leakage/flow/pressure detectors. I am lucky as I quite enjoy the repair/build work that I do, and as such I would probably be in the same field but with more mechanical/electronic build work.

2. As an ex-rugby man, how does Brawd training and the Brawd experience in general compare to a rugby team?

There is a lot of crossover between the rugby ethics and brawd though there is less contact in brawd. An example is the determination of the group to ensure everyone is at their best and is pushed/dragged along to their best possible achievement

3. Do you have any animals and if you could be an onscreen animal, which would you be?

We have two dogs named Toby and Max and two cats called Gizmo and Fudge, I would have to say Baloo the bear from the jungle book just going with the flow.

4. What’s the toughest challenge you’ve faced in a Brawd shirt and what got you through?

Anything involving running as I have no love for it and struggle to keep any motivation to keep going, the thing that has kept me going doing any running is as I have said the camaraderie and encouragement of the people around me when running

5. Name 3 perfect tunes for 3 perfect locations, other than the Vale for 3 types of Brawd training sessions – either ones you’ve done or ones you’ve made up.

6. The Lions are touring New Zealand this year, which 3 Brawd members could be on the flight and in what capacities?

Andy Clifton on logistics, Simon Watts as the motivational speaker, and Pops Andrew Harris as every tour needs a clown

7. With the summer on its way, imagine you’re building a Brawd/MsFit Beach House – what would be inside and where would it be situated? Name 3 Brawd/MsFit Members who would run it.

Lots of alcohol, good food, TVs with every rugby game being televised at that moment on or repeats of wales grand slams lions tours and great games of yesteryear. My wife, Emma Llewellyn would have to be bar manager chief organizer. Jason Davies in charge of programming. And Mark Lawlor on bar duty just to see him getting top shelf drinks

8. What is the best Brawd/MsFit social event you’ve attended so far?

9. Put your phone/iPod/music player on random and name the first 3 songs that come up!

It has made me a lot fitter and I’m back to wanting to train and being gutted when I can’t which I haven’t had for a long time. It has also really helped me settle in Barry as I knew nobody here really before joining

Probably home-made Spaghetti, my guilty pleasure would probably be my version of cabonara which I am banned from making more than 3 times a year by Emma as its half a pint of cream, half a block of cheese, chicken, bacon, mushrooms, onion, whole grain mustard, and pasta