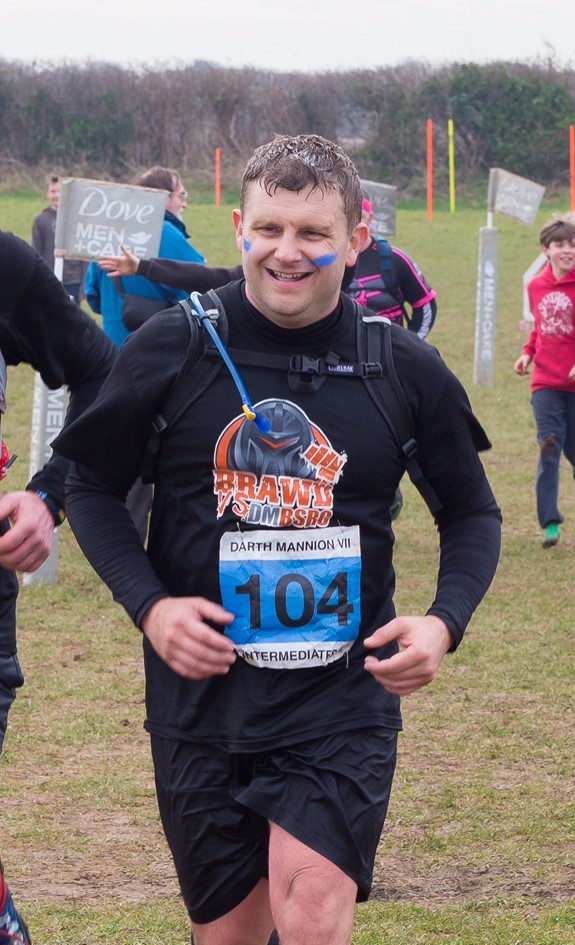 1. What do you do for a living? If your role didn’t exist, what job would you like to do?

I have my own business, a National sign company – Lakeside Signs. I set it up eleven years ago but I’ve been living the dream in the glamorous world of signage since I left school in 1993. I had always wanted to be a primary school teacher and had a place booked to study to become one at Southampton University in 1994, but the sign company I was working for at the time offered me a Ford Sierra to stay and the rest, as they say, is history.

2. You were part of the amazing group that helped organise and completed the 3 Peaks Challenge (climbing Ben Nevis, Scafell Pike and Snowdon in 24 hrs) recently – what are your 3 abiding memories of that weekend?

The Three Peaks weekend was one of the best experiences of my life. It was an amazing four days spent with the best people. The whole weekend was full of abiding memories that will stay with me forever. I remember racing through Welsh villages on our way to Snowdon as we were running behind and had taken a wrong turn. Jo Phillips was driving and we were “kitting up” in motion and found ourselves stuck behind a slow-moving driver. At a set of traffic lights, Peter Regan jumped out of his seat, de-bused and asked the driver to let us pass. It was mega-exciting, I felt like a solider! When we’d finished the challenge at the top of Snowdon, I was with Nic Peters, Jenny Morgan and Christine Regan and we were soaked through, cold and tired having been awake for around thirty-six hours. We had decided to catch the train down but were told that all the trains were full. I don’t think I’ve ever been more disappointed about anything, ever, and if I hadn’t been trying to look cool in front of the girls, I’d have definitely cried like a baby. After the challenge, a few of us ended up in a nightclub in Bangor. We all ended up on the dancefloor in a circle singing to Michael Jackson’s “Man in the Mirror”. It felt amazing at the time but unfortunately was recorded on camera and it is pretty cringe-worthy viewing.

3. Which 3 pastimes, apart from Brawd, do you enjoy the most on your days off?

I don’t take a lot of time off and I’ve got four children, so at weekends and on the handful of days I do take off, I’m usually doing something with the kids. I bought a SUP last summer and have managed to get out on it a handful of times but I’d really like to use it more often. My eldest daughter wants to learn how to SUP so hopefully that will be the excuse I need to use it more often. I also try to get out for a run on a Sunday with the other half of the Rhoose Two (Andrew “Pops” Harris). As much as I dislike running, I always enjoy these runs together and he never ceases to endlessly crack me up.

4. Which type of Brawd session gets you going the most? Where is it and who is taking the session?

My favourite is Lloydy’s Farmers Walk. I usually do this with my partner of choice, Jason Redrup, who pushes me to my absolute limit. However, I also love sessions where they are so tough and I work so hard that I feel physically sick. I remember some of Daf and Andy’s Thursday night sessions where I had to lay on the beach or sit in the car and wait for the shakes to pass and compose myself enough to drive home.

5. At Brawd and MsFit parties, you are quite the ‘hot stepper’, which 5 tracks get you and keep you on the dancefloor?

I’m not cool when it comes to music. When I was growing up and people started listening to trendy stuff like Nirvana and Led Zeppelin, I was listening to Wham and Rick Astley. I like dance music, in particular the big anthems, and spent a lot of my younger years in clubs like Lakota in Bristol and Miss Moneypenny’s in Birmingham. My favourite tracks tend to be those that remind me of a good time so here are a few of those…
George Michael “Fast Love” as it reminds me of the amazing summer of 96 that I spent in Newquay with my mates.
GLC “Guns Don’t Kill People” when Lloydy “dropped it” at the Brawd/Ms.Fit Christmas party.
Una Mas “I Will Follow You”, as it brings back memories of dancing all night in Miss Moneypenny’s with friends
Brand New Heavies “Back to Love (Graeme Park Remix)” – This is my all-time favourite dance track and reminds me of clubbing generally.
DJ Jazzy Jeff and the Fresh Prince “Summertime”. This just conjures memories of being young.

6. You’re a veteran of the Obstacle Course Race (OCR), which sticks out in your mind – for the right reasons – and are there any you’ve yet to try?

Tough Mudder is my favourite OCR by a long way and I can’t wait for it in a few days’ time. When I did my first TM I had really, really bad cramp in my calves and had to be seen to by one of the medics at the bottom of ‘Everest’. He said not to attempt Everest again but I’m not one for giving up so Lloydy and Pops dangled Andy Davies over the top and they dragged my pathetic arse over. I wish we had it on camera. But probably my strongest memory was doing Darth Mannion last year. I was in the sand dunes, lost, alone and completely broken. I think I must have had some sand in my eyes as they were badly watering. I’d made the decision to give up but then Lloydy popped up from nowhere and shouted at me “hurry up you bellend” and made me carry on. I’ll never forget crossing the finish line flanked by Lloydy and Watters. Again, I think I must have had something in my eye as I had tears running down my face.

7. You are also a veteran of the Big Brawd Adventure in Cornwall. What are your memories of this year and how did it compare to previous years? What new thing could we do in next year’s trip?

The stand out memory for me is being in the sea having just jumped off of a cliff whilst coasteering. The waves suddenly picked up and I was being really badly thrown about. As I was looking up I could see Lloydy looking down at me and laughing. At one point, I remember thinking to myself “Are these waves really big or do I just look like a massive bellend?” I’m not sure how it could be improved, but I know Lloydy will think of a way. He always does!

8. How do you incorporate the healthy eating and exercises when you are away with work?

I work away a lot and the only way I can keep healthy is to lock myself in my room and out of the bar. I get back to my room, strip down to my pants and work on my laptop, only re-dressing to allow the room service to be delivered. I usually stay in Holiday Inn or Hilton hotels (as I’m a slave to the loyalty points) and both chains offer a healthy eating menu which I do my best to stick to. Exercise wise, I carry a TRX in my bag and try and allocate half an hour to do a workout from the Brawd website, again, usually in my pants.

9. Also, when you are away, apart from exercise, what keeps your noggin on straight, i.e. what chills you out: music, TV, reading, another?

I like to read when I’m away. Any kind of fiction will do, I’m not fussy. I buy all sorts of random books from the “2 for £7” section in Tesco and give them a try.

Difficult to answer as I don’t want to sound like an advert or the lovechild of Daf and Lloydy (although I do love them both in a non-gay way). That said, Brawd has had a huge impact on my life. Prior to meeting Lloydy on that fateful Tuesday morning, I hadn’t exercised at all for twenty-five years, I couldn’t run more than a few metres, I got out of breath tying my shoelaces and I bought my clothes in ASDA as I thought I might as well look fat in cheap clothes rather than shelling out good money for them. Now I’m nearly three stone lighter, my waist is six inches smaller, I can run a reasonable distance and although I’ll never be a contender for Athlete of the Year, I think I can keep up with most of the other guys.

I’ll never be an Adonis or anything, I know that, but I’d like to just keep making progress. As Lloydy says “Consistency over time” and that’s all I’m trying to achieve to keep pushing forward. I’d like to be in a position where I no longer fear events like Darth Mannion and I’d like to get fit enough to be able to run Marathon De Gwyr.

My favourite nutritious meal is Hiltons Piri Piri Superfood Salad. It has pretty much every healthy ingredient in it that you can think of but somehow the Piri Piri chicken disguises the healthy stuff and makes it taste amazingly good. My guilty pleasure is the fillet steak kebab with sautéed potatoes at the Highwayman, washed down with a few pints of Staropramen in the company or Watters and a few other Brawds.