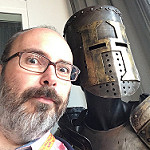 1. What do you do for a living? What job would you like to try out for a day?

I work for Sky as a media planner, which basically means I study who watches which TV shows and when, and then try and tell them what other things they should watch. Currently I’m sort of “rented out” to the History channel so I’m looking after that, as well as Crime + Investigation and Lifetime. So if you’ve feel like you’ve been bombarded with ads telling you to watch WW2 Treasure Hunters with Suggs recently, you’re probably my target audience and I’ve done my job right. Please watch it, Mondays at 9pm. Have worked in TV for about 20 years, but things haven’t really been the same since Bravo (the best channel ever) got closed down in 2011. When I moved back to Wales I did a few stints in various other places including ASDA and Cardiff Council (trying to save the Coal Exchange) but nothing lasted and with a little one and a wife back in college I needed stability and a steady income so the weekly trek to London became a bit of a necessity again. Not sure what I’d do for a day, but our goal when we first moved back to Wales was to open a B+B, and I think one day we’ll definitely still wander down that road…

2 What’s the best thing about training early mornings and what is one thing you would change?
The best thing is that they are so early! It’s amazing how energised and positive they leave you feeling about the day ahead, and you’ve still actually got the WHOLE day then to channel that energy. Admittedly in my case, that means channelling it into staring at spreadsheets, but still. Only thing I’d really think about changing is the cold starts in the winter! I started back in January and can remember those well – am not looking forward to those!

3. If you had to reform one now defunct band what would it be and which song would they invite you onstage to join in on?
Great question! Been thinking about this a lot – it’s a really difficult one, and technically they’re not really defunct, but one of my favourite bands is Squeeze, so I’d love to see them with my dream line-up including Jools Holland on keyboard and Paul Carrack singing. Would love to get up on stage and blast out “Tempted” with them!

4. What is your ‘go to’ exercise – which do you think ‘I’ve got this’ and which are you working on improving?

I do like going for a run, as long as it’s not a) uphill, b) fast, or c) uphill and fast. The Friday crew can vouch for that, it hasn’t been nicknamed Spew Hill for nothing! But running is great because you can just throw on a pair of decent-ish shoes and just get out and do it – especially in Barry and the Vale, so many great places to explore. But for other forms of exercise, I wouldn’t say there’s anything I’ve particularly “got” but there are definitely preferences. Ask me to do 50 squats say, and I’ll give it a damn good go. Any more than 2 burpees, however, and I start to question what I must have done in a previous life to endure such torture.

5. If you had to dress up the Brawd / MsFit coaches for Hallowe’en, what would they be dressed as?

Haha! Brilliant. Well I love a good horror movie, so I’d have to try and go for characters from all my favourites – maybe Jen and Nic as the twins in the Shining, then the guys can fight over who gets to be someone out of Freddy Krueger, Jason Voorhees, Michael Myers… all the classics. But if anyone dressed up as Pennywise, I’m out…

6. Autumn’s well and truly here: what’s the best aspects of the season – what are you looking forward to – and which aspect would you change?

I love Autumn – definitely my favourite season! Mostly because Halloween is in it and who doesn’t need an excuse to let out their inner Goth – I’ve got an awesome Halloween themed playlist that I can listen to for a whole month legitimately without any complaints from the family. I also love the colours of Autumn, and the fact it gets a bit cooler – I’m much happier outdoors when it’s not too hot. Me and heat are not friends. There’s only two things I’d change really. I hate putting the clocks back so that it ends up being dark by 5 in the afternoon. And the 42 year old me feels compelled to moan somewhere – the thing I really hate is knob heads letting off fireworks at all hours in October. Makes it very difficult to persuade the dog to go outside in the dark.

7. Which would you be better at building: a log cabin, an igloo or a blanket fort? And which would be the most fun?

I think I’d be better at the blanket fort, there’s not an awful lot of effort involved for a pretty rudimentary one. Most fun though would be an igloo – a major childhood memory for me was winter in 82 when we had so much snow we had to dig tunnels between the houses on our street in the valleys and that was great fun!

8. What’s the one thing that stands out from a Brawd/MsFit session? What’s your stand out memory?

Absolute standout moment for me was the family boot camp in the summer. I brought my 6-year-old son, Owen, down and he had a whale of a time! I can still see it now, during the demo of the “tunnel of love” he was so small that coach Daf couldn’t really crawl underneath and basically dragged him along – he thought it was hilarious! It’s really important to me to show Owen that exercising can be and should be fun – I had so many hang-ups and anxieties about it for such a long time that it’s held me back and I don’t want to pass that negativity onto him, so that day was genuinely really special for me.

9. Taking your iPod/Phone/mp3/CD collection, and engaging the Shuffle feature, which 4 songs does it come up with?

I’m dreading this, because I have listened to some dubious stuff over the years. First up is Jump They Say by David Bowie – was a bit obsessed with that as a sixth former. Next up, The Horn by Super Furry Animals. Happy with that! Not one of their better tunes, but they are the best band. Third up – Orange Crush by REM. My iPod is definitely being kind to me today! Fourth – Top by Live. I don’t even know what that is. Must be one of the wife’s…

So much! As mentioned earlier, I had so many hang ups about exercise and sport down to a single thought – that I was just a bit shit at it – that I didn’t do anything for years. But Brawd is perfect because I get to exercise outdoors with a really great bunch of people who don’t care if I’m about 10 minutes behind them, or that I have to stop at the end of hill sprinting for a dry-retch. Just 100% support, camaraderie and encouragement. And it’s definitely bitten me with the bug – I genuinely feel a bit guilty if I stay still for too long these days, and I’m desperate to do more. So many little things as well that I didn’t foresee happening – more confident at work, less likely to feel sad, MUCH less likely to give up on things because they’re not going my way.

It’s still small steps for me before any giant leaps. But I’ve signed up to do the Mo-Run (for the Movember Foundation which raises funds & awareness for prostate cancer, testicular cancer, mental health and suicide prevention) in November, which is a 10k run, and I’m determined to make it over the finish line without having to walk any of it. I’ve got a huge amount of weight to shift from the old carcass, so need to look at just generally doing a bit more – used to love swimming so once the moob hang-up is conquered I’d love to get back in the pool. My son wants a pair of roller boots for Christmas, and I’m tempted to grab a pair myself too.

My favourite thing at the moment is a pilaf which is made with blitzed-up cauliflower instead of rice, tons of spice, chicken, pomegranate seeds, etc. I got it out of a Hairy Dieters cookbook and bloody love it. Guilty pleasure for me is 100% mash. I love mash. Would gladly eat that with everything, and if it was socially acceptable to eat mash sandwiches, I’d be all over that. I have eaten them in the past, when no-one’s looking…