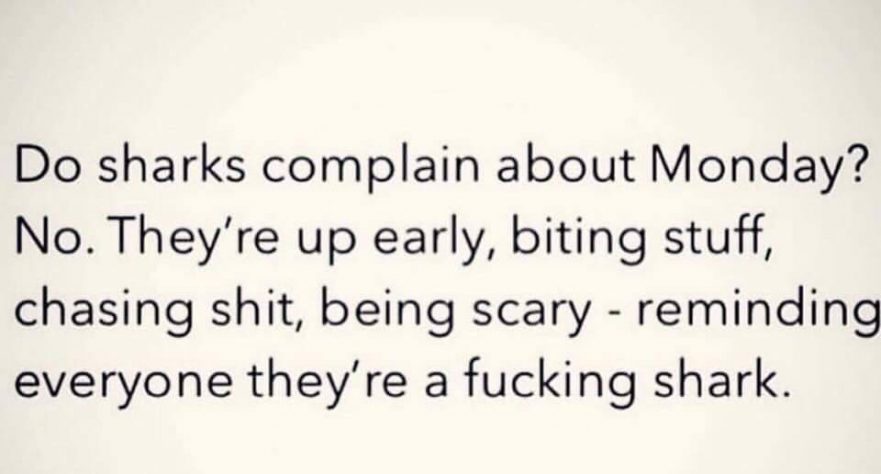 I know it’s not Monday but it get’s me onto an interesting point.

And HOW we react to them makes the world of difference, especially if you are a human (as I’ve got no shark or animal clients for that matter (most of the time).

Especially if you are human…

Think about the last time you watched a nature documentary ( I love these by the way).

Did you notice how animals deal with danger?

Perhaps you were watching those seals making a dash across a shark-infested channel of water, swimming for their lives.

Some even get nibbled and nearly caught…. cue dramatic music.

You can just FEEL THE TERROR!!!!

The Seal then almost instantaneously goes back into “mucking” about with his mates or prepares for another death deifying swim to catch some more fish for his pups.

And I’m sure you’ve seen this one

Did you notice that once the danger had passed, the Seal and Iguana quickly settled back into “being a Seal” and “being an Iguana”

Something in the seal’s brain that gave the alarm when the shark was noticed and attacking…just SWITCHED OFF once the danger had passed.

The human mind – well this is different, especially when it comes to the “internal” dangers or threats that can trigger anxiety, stress, worry or irritability.

You see, we all live in this very highly stressed and busy world and sometimes stress and fatigue or low mood seem adhesive.

Well you are not a seal – for sure.

And as a human it’s almost as if certain parts of your brain switch to full alert…AND DON’T SWITCH BACK OFF AGAIN as they’re meant to.

SO WHAT CAN YOU DO?

Look – this has taken a while for me to grasp myself, so please don’t pretend to get this straight away and then when you don’t – just dismiss it.

You absolutely cannot stop the triggering of unhappy memories, negative self talk and judgemental ways of thinking – but what you CAN stop is what happens next.

You can (with practice) stop the vicious circle from feeding off itself and triggering the next spiral of negative thoughts.

And you do this my harnessing an alternative way of relating yourself to the world.

This is not Mumbo Jumbo Shit

The mind can do so much more than simply analysing problems with its DOING mode.

The problem is we use doing mode too much so we can’t see that there is an alternative.

Yet there is another way.

If you STOP and reflect for a moment, the mind doesn’t just think.

It can also be AWARE

It can be aware that it is thinking.

And to my knowledge we are the only ones on Earth that can do this.

This form of pure awareness allows you to experience the world directly.

It’s unclouded by your current moods, thoughts and emotions.

It’s like a high vantage point and with some practice allows you to step outside the chattering negative self talk and your reactive impulses and emotions.

It allows you to look at the world once again with open eyes. And when you do…

A sense of wonder and quiet contentment begins to reappear in your life..

Then your youngest daughter pukes all over you and the moment is well and truly gone….

LOOK – I’m no monk – but I use this EVERY SINGLE DAY IN MY LIFE.

And it’s called MINDFULNESS and it’s all the rage today…but has been around since we existed.

I’ve been practicing it now for almost 10 years…. And as you can probably expect – have my own view and ways of doing it (Ever since I stopped a plane taking off in Edinburgh airport bound for Cardiff….

The real voyage of discovery consists not in seeking out new landscapes but by having new eyes.
(MARCEL PROUST, 1871-1922)

Ps – How to double your life expectancy is tomorrow.

I’m off to watch the Discovery Channel