By friend of Brawd: Mart Aaron

Since homo sapiens first began chasing down their prey on the plains of Africa, we’ve been slowly evolving as a species – granted, some of us quicker than others! – but you might be surprised to learn what our primitive bodies are actually capable of achieving.

Forget Marvel comics we already have super sapiens living on planet Earth right now, men and women who are pushing their bodies further than anyone thought humanly possible, some due to their unique physiology, others using mind over matter.

Next time you take on a Brawd adventure that involves some open water swimming, spare a thought for Frenchman, Ben Lecomte who somehow managed to swim, yes swim across the Atlantic Ocean from Massachusetts to Brittany, in 1998.

That’s a staggering 3,716 miles of deep ocean and it took him just over two months to complete, helped along by a strong Gulf Stream current. 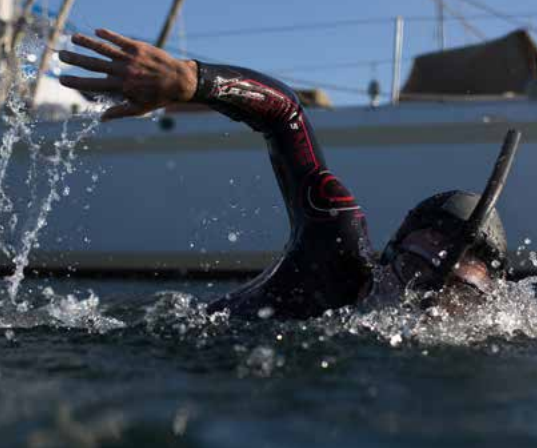 During his adventure, Lecomte was kept on his toes for five days by an inquisitive great white shark following him.

Luckily for him, his support boat was fitted with an electro-magnetic field which kept the men in grey suits at bay.

“I’m not an Olympic swimmer, I’m an adventurer who likes to swim”.

In April 2017 Ben plans to be the first person swim the Pacific Ocean to help raise awareness about the plight of our oceans and carry out scientific experiments throughout the six month long expedition.

Moving onto dry land is Dean Karnazes, an American ultramarathon runner who has smashed just about every record that’s ever been set and created some that will probably never be broken. What Dean hasn’t achieved in a pair of trainers isn’t worth knowing about.

He began a life dedicated to fitness as many of us do…after a night on Tequila.

After one too many he decided to try and run home (we’ve all been there, especially if you live in rural Wales where taxi’s are as rare as dodo’s).

Thirty miles later in just his pants and trainers he realised he’d tapped into his body’s hidden energy reserves and managed to finish the run in one piece.

And so began a life-long obsession with distance running. In 2005 Karnazes completed one of the most awe inspiring runs of all time when he pulled off a non-stop, 350-mile run around the San Francisco Bay area.

He pushed himself for over 80 hours, going without sleep for more than three days and phoning for pizza deliveries en route to keep his energy levels up.

“Run when you can, walk if you have to, crawl if you must. But never give up”.

His achievements are too numerous to list here but he’s also completed the gruelling Marathon des Sables, run 135 miles non-stop across Death Valley in 120°F heat and completed a marathon to the South Pole, where temperatures fell to a toe-tingling -40°F.

If you like endurance challenges then watch this video of Brawd chatting to Simon Grundy as he prepares to embark on a crazy jungle endurance race.

Dean Karnazes during his 50/50 challenge. Image courtesy of http://www.ultramarathonman.com

No-one can argue with his mental and physical ability but it’s his physiology that makes Dean unique.

Unlike most of us, his lactate levels actually reduce as he exerts himself more, so his muscles never cramp up. Is it down to genetics, diet, low sweat rate or training, no-one is quite sure but it’s baffled sports scientists around the world.

Plenty of super heroes can fly but most don’t fall from the sky. Juliane Koepcke was only seventeen when the passenger plane she was on was struck by lightning.

The plane split in two and Juliane, still strapped into her seat fell two miles to the ground, landing in dense Peruvian rainforest, miles away from civilisation.

Out of the 92 passengers on board, Juliane was the only survivor. Miraculously she only suffered a broken collarbone, some superficial cuts to her legs and a swollen eye but her ordeal had only just begun. 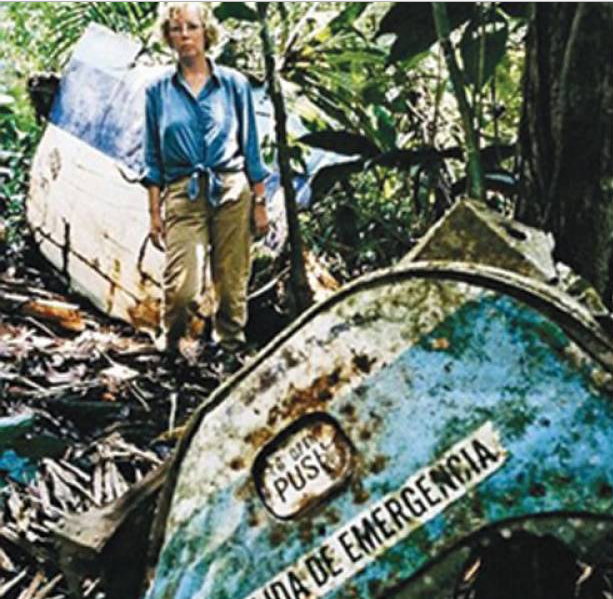 Juliane revisited the crash site in 1998 and has written about her experiences in her memoirs, When I Fell from the Sky.

She spent the next nine days surviving on just a bag of boiled sweets (she’d found in the wreckage) as she attempted to walk her way to safety, dodging caiman, snakes and jaguars along the way.

On day 10 she was found by forest workers, weak and delirious but very much alive.

“When we have really resolved to achieve something, we succeed. We only have to want it”.

Luckily Juliane had previously spent time in rainforests due to her father’s research work but it was her sheer determination and invincible spirit that ultimately saved her life.

From the tropics to the polar regions…

Wim Hof aka The Iceman get his kicks from the cold or more precisely from sitting and swimming in it. Wim discovered his superpowers by accident after saving a man from a frozen lake.

Since then he’s confounded scientists with his ability to withstand extreme cold.

“We can do more than we think”. 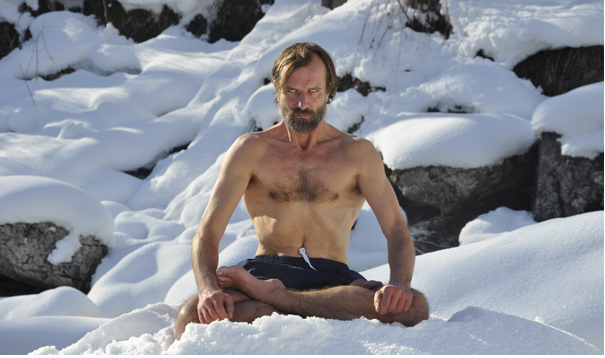 The Wim Hoff Method in action.

For his Guinness World Record in 2011 he sat, covered in ice for nearly two hours without his core body temperature changing.

He’s not alone in this though, some Tibetan monks practice a yoga technique known as Tummo which allows them to raise just the temperature of their fingers and toes by as much as 8 degrees while the rest of their body remains unchanged.

Hof has also climbed to 22,000ft on Mount Everest in just a pair of shorts (as you might expect) and completed a desert marathon without a single drop of water.

Wim believes that any mortal can learn his meditation techniques, so check out his website if you fancy an ice bath anytime soon. It could come in handy for the BRAWD Xmas swim next year!

Now please don’t try this at home but this next man is truly electrifying and great to have around at Xmas parties.

Biba Struja aka The Human Battery discovered his appetite for electricity after accidentally picking up a live cable at work.

Anyone else would’ve died instantly but Biba was unharmed and quickly realised he was able to conduct millions of volts through his body and save it in reserve, like a human battery. 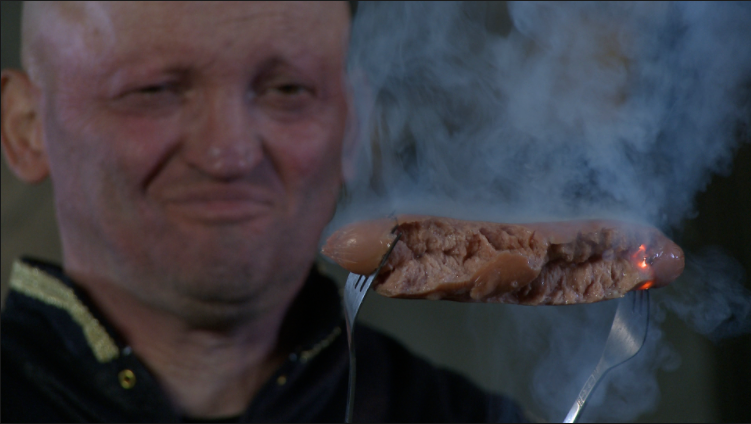 Electric Biba is capable of conducting electricity and can consciously control its power while discharging it.

As if that isn’t strange enough, he has no hair or sweat glands meaning there’s very little moisture in his skin. He also has two fewer skin layers than most people too so virtually no electric current flows through his body.

The sensational Serbian has subsequently appeared on various TV programmes around the globe, boiling eggs and cooking sausages with just a couple of metal forks and his bare hands, although I have to say, I prefer mine a little more browned.

Closer to home in Cardiff is extreme environment athlete, Richard Parks who transformed his life after a shoulder injury forced him to retire from professional rugby union.

After some dark times and soul searching, Richard threw himself into climbing and set himself an impossible challenge – to climb the world’s highest seven summits and three poles within seven months- all in aid of Marie Curie.

Bearing in mind he was no ice climber or mountaineer for that matter, Richard spent around 18 months learning the ropes and throwing himself into various expeditions.

Incredibly he completed the challenge in 2011, reaching The South and North Poles as well as summiting Mount Everest (known as the third pole), Kilimanjaro in Africa, Denali in Alaska, Vinson in the Antarctic and more.

Think about that for a minute; seasoned climbers can take up to two months to summit Everest, taking into account weather and acclimatisation issues. But the plucky Welshman did the whole challenge in just seven months. 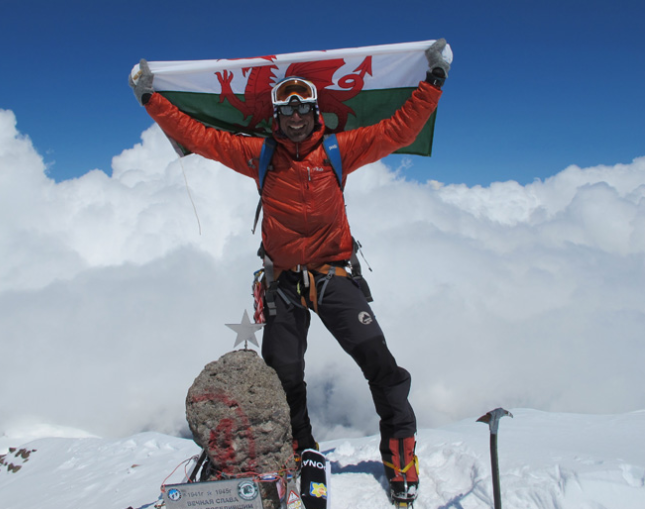 Richard Parks during his 737 Challenge reaching the summit of Elbrus. Image courtesy of www.richardparks.co.uk

Physical fitness will only get you so far. At some point we all, as a species reach a plateau.

There are plenty of supremely fit people out there but only a few have the mental fortitude to conquer the seemingly impossible, people like Ernest Shackleton and Sir Ranulph Fiennes.

Richard sits firmly in this category. His supreme mental strength and self-belief continues to carry his broken body that extra mile where other others throw in the towel.

These days he’s a firm believer in training his brain using cognition apps which are readily available for your tablet or phone.

So the next time a work out, run, swim or paddle gets too much for you, remember – most of it is in your head, the classic battle of mind over matter. History is littered with it.

You might not be able to sit in ice for hours on end or cook sausages with just your fingers but under the right circumstances your body will perform far better and take you far further than you ever thought possible.

You’ve just got to learn how to control your mind first.